Roll over image to zoom in
Click to open expanded view

Product prices and availability are accurate as of the date/time indicated and are subject to change. Any price and availability information displayed on [relevant Amazon Site(s), as applicable] at the time of purchase will apply to the purchase of this product.

Product prices and availability are accurate as of the date/time indicated and are subject to change. Any price and availability information displayed on [relevant Amazon Site(s), as applicable] at the time of purchase will apply to the purchase of this product.

Add a handsome yet highly functional tool to your kitchen arsenal with this wooden cutting board from John Boos. Made of solid hard rock maple with edge-grain construction for durability, the reversible cutting board provides two flat sides and slightly rounded edges for comfortable handling. The finely crafted board, which measures 20 by 15 by 1-1/4 inches, works well for a variety of food-prep tasks, whether chopping meat, slicing and dicing fruits and vegetables, or mincing fresh herbs.

Keep the cutting board clean by simply washing it with hot soapy water after each use and dry it with a clean paper towel or let it air dry. The board was shipped from the factory with a penetrating natural oil finish, which allows for great cutting, chopping, and slicing, but it’s important to give the cutting board a good oiling on all surfaces every three to four weeks. When the cutting board becomes dry and lighter in color, it’s time to re-oil, which is an easy way to lengthen the life of the board by many years.

Every professional or at-home chef knows the importance of a good cutting board. John Boos has developed a full line of professional-quality FDA-approved cutting boards in a variety of styles to accommodate individual needs and preferences. Choose from end-grain or edge-grain construction and from over 39 shapes and sizes. 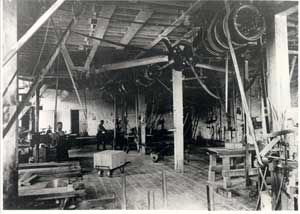 The History of John Boos & Co

How It All Started

John Boos & Co. is the oldest industry in South Central Illinois, located in Effingham Illinois, and the company has been in business since 1887. Conrad Boos Sr. founded the business in 1887 and named it after his son, John. For many years he worked out of the blacksmith shop in Effingham, and lumber was cut from areas in close proximity. In 1892, the plant moved to its present location at 315 South First Street in Effingham. 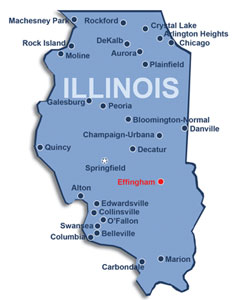 The blacksmith used a Sycamore tree placed on three legs to straighten horseshoes. The wooden block absorbed the shock of the hammer. In 1890, a local butcher realized the block could be used for cutting meat, and had one made for this purpose. The word spread to surrounding small towns and cities and by 1911, John Boos was shipping from coast to coast. Commercial meat markets were very popular through the 1959, and with the advent of dishwashers and plastic, the commercial market began to feel the impact of a lower-cost alternative, though perhaps not as safe!

In 1956, John Boos began to take some of their products to local retail shops and offer the blocks and cutting boards for resale. Merchants would sell these products to consumers for home use. Today, it is common to see John Boos cutting boards in both the commercial kitchen of hotels and restaurants, culinary schools and even cooking shows on television. The old craftsmen work ethic is still around at John Boos & Co. There have been a few changes, though. Sycamore lumber is no longer used–John Boos manufactures premium Hard Rock Maple lumber from surrounding states in the mid-west, most of which comes from the Northern States. And John Boos automation has replaced much of the older equipment. The 1942 block press is one piece of equipment that’s still very much in use today, however.

John Boos & Co. utilizes 100% of their raw material to benefit the manufacturing processes. The smallest lumber scraps are transformed into sawdust and used as the material of choice to generate electricity and create steam to fuel the boilers. The steam is also used to operate the glue presses and dry kilns. Any saw dust unused by the company is provided to the local agricultural industry. 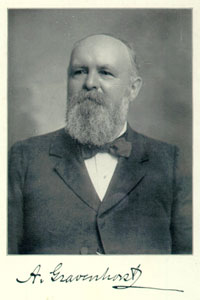 In 1892 the Boos family sold interest in the company to the Gravenhorst family.
View larger.

In 1892 the Boos family sold interest in the company to the Gravenhorst family. (There is currently a fifth generation Gravenhorst working for the company. T.S. Gravenhorst, III was named President in 1978 and held that office until retirement in 2002.) In 1895 the building burned and was rebuilt; however, in1899 it was decided that more space was needed, and it was then that they moved to the present site of 315 South First Street. The building was purchased from the old Effingham furniture manufacturing company.

In 1920, extra buildings and kiln capacity were added. By the 1940s, butcher blocks were found in every restaurant, food store and butcher shop in America. Then came World War II, which was instrumental in changing the manufacturing philosophy of the management at John Boos and also the course of the business.

Last Half of the Century

In 1955, the company expanded by adding a dry kiln, increasing its office space and adding more manufacturing space. The shipping docks were enlarged, warehousing space added and new products added. In addition to the standard old-style butcher blocks, butcher block tops, which are laminated strips of northern hard rock maple or Appalachian red oak, were in great demand, not only in the foodservice industry, but also in the home. 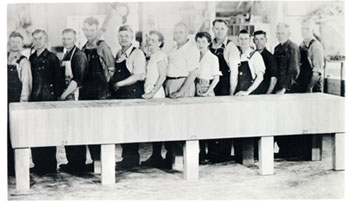 The company continued to expand during the late 1960s and early ’70s with the growth of its metal fabricated table market. Metal tables had replaced the butcher block as a necessary product in the majority of foodservice/supermarket establishments. Tables with poly or synthetic tops, stainless-steel tops and maple tops were being manufactured. And even though the government was tough on wood products through the 1970s and ’80s, the company continued to grow with its new line of BDL store fixtures, park benches and other butcher block furniture items.

The wood and metal products are listed with the National Sanitation Foundation, the leader in sanitation agencies for approving equipment to be installed in foodservice and supermarket operations. The products must have approval of various sanitation agencies in order to be accepted by the industry.

In 1994 we were awarded the Gold Medal for Excellence in Foodservice Equipment by the Chefs of America. This ceremony was conducted at Carnegie Hall in New York City, and we were 1 of only 22 companies receiving awards.

Hard Rock Maple is the board of choice among professionals because it’s friendly to a knife’s edge, has anti-bacterial properties, and the larger boards are skid-free, and stay firm while in use. There are also many board designs for different applications and use. John Boos edge-grain-constructed hard maple boards are NSF (National Sanitation Foundation) certified, this regulatory agency governs the commercial markets, as it pertains to particular health and sanitization codes. Still many are unaware of the studies conducted by the NSF, Dr. Dean Cliver, and others, on how the maple boards kill bacteria.

How do I keep my cutting board sanitized?

Keep your Boos cutting board clean by simply washing it with hot soapy water after each use and dry it with a clean paper towel or let it air dry. If you want to sanitize the board more thoroughly, a diluted mixture of chlorine bleach or vinegar solution consisting of one teaspoon of liquid chlorine bleach in one quart of water or a one to five dilution of vinegar.

Do not soak or submerge the board in water, for this will disrupt the moisture content and cause the rails to split. Wood cutting boards are NOT dishwasher-safe.

How do I maintain and prolong the life of my cutting board?

It is extremely important to give your cutting board a good oiling on all surfaces every 3-4 weeks. Your Boos board shipped from the factory with a Boos block cream finish with beeswax, which protects and prolongs the life of your board. We recommend keeping the board oiled with John Boos Mystery Oil and/or Boos Block Cream with Beeswax.

The company currently occupies approximately 150,000 square feet of total production capacity in Effingham, IL and approximately 65,000 square feet of manufacturing capacity in Philipsburg, PA and Suring, WI, which produce wooden school furniture. The company has four dry kilns that will dry up to 210,000 board feet of lumber on a continual basis. There are 140 employees in the Effingham facility. Most of the hardwoods used for manufacturing is shipped from Great Lakes states via truck, while our second largest commodity, stainless steel, comes from steel warehouses and distribution centers in Chicago, Indianapolis, and St. Louis. The company currently is cutting up about five million feet of maple and oak each year.

A research team led by Dean O. Cliver, Ph.D compared plastic and wooden cutting boards. Their research was first intended to develop means of disinfecting wooden cutting surfaces at home, so that they would be almost as safe as plastics. They found that disease bacteria were not recoverable from wooden surfaces in a short time after they were applied, unless very large numbers were used. New plastic surfaces allowed the bacteria to persist, but were easily cleaned and disinfected. However, wooden boards that had been used and had many knife cuts acted almost the same as new wood, whereas plastic surfaces that were knife-scarred were impossible to clean and disinfect manually, especially when food residues such as chicken fat were present. Scanning electron micrographs revealed highly significant damage to plastic surfaces from knife cuts.

Although the bacteria that have disappeared from the wood surfaces are found alive inside the wood for some time after application, they evidently do not multiply, and they gradually die. They can be detected only by splitting or gouging the wood or by forcing water completely through from one surface to the other. If a sharp knife is used to cut into the work surfaces after used plastic or wood has been contaminated with bacteria and cleaned manually, more bacteria are recovered from a used plastic surface than from a used wood surface.

The research team has no commercial relationships to any company making cutting boards or other food preparation utensils. They believe, on the basis of their published and to-be-published research, that food can be prepared safely on wooden cutting surfaces and that plastic cutting surfaces present some disadvantages that had been previously overlooked. In conclusion, they believe their research shows evidence that wooden cutting boards are not a hazard to human health, but plastic cutting boards may be.

There are no reviews yet.

Currently all your purchases will be transferred to Amazon and completed with your Amazon account. Dismiss